If you're planning a holiday in Spain, beware!

The gullibility of Brits in the Spanish Costas, and not only tourists, never ceases to amaze me.
Virtually every day I hear that someone or other has been the victim of a pickpocket or handbag snatch.
The experience of being mugged in public is both traumatic and disruptive, particularly if your passport happens to be among the stolen items. Which is why I have always been ultra-careful when it comes to protecting my possessions.
I have never been robbed – unless you count the evening I found 45 euros in notes on the floor of the Irish bar in El Raso and gave it to a tipsy punter who claimed he had dropped it. I realised when I got home that the money had fallen out of my own purse!
OK, that was stupid – but nowhere near as daft as those male tourists who wander around Spanish markets with their wallets wedged in the back pocket of their shorts. And the women who leave their handbags on a table or chair while they chat to friends, only to discover when they come to pay the bill that they have no money…and no handbag.
It happened to a friend of mine a while back. She went for a coffee after a busy day at work, plonked her handbag down alongside her and when she next looked - whoosh, it had vanished.
The sting was that this particular lady invariably carried all her documents, including her passport, in that bag, not to mention a considerable amount of money. It was an experience that will live with her until her dying day – and the saddest thing of all is that it could have so easily been avoided.
My friend has been living in Spain for some time, but most of the victims of the petty thieves tend to be tourists. They are so hell-bent on enjoying themselves that being robbed is the last thing on their minds. What juicy pickings for the villains... I follow a regular procedure with my handbag. When I am in a public place, I always wrap the strap around my wrist so it can’t be snatched. And when I sit down, the strap goes under a chair or table-leg so it can only ‘vanish’ accompanied by an entourage of furniture.
Oh, and I NEVER take a bag to market – I carry cash in notes and wedge them into my bra. It means that no-one can rob me without being arrested for indecent assault!
My advice to men is that if you go anywhere where there’s a large crowd, leave your wallet at home, in your hotel, or hidden under the carpet in your car boot. Put the cash you need in your trouser pocket (not the back one!) and to make the fortress impregnable, how about keeping your hand in your pocket as you walk around?
While the lowlife element of Spain’s impoverished Moroccan and Romanian communities is thought to be behind the majority of bag-snatches, I suspect the perpetrators come from more diverse roots. What one does have to concede is that these ladrones, however much reviled, have a remarkable skill.
One person I know had her purse stolen from the handbag on her shoulder as she browsed her way around a crowded department store. The thief not only unzipped the bag and removed the purse without anyone noticing – but also zipped the bag up again!
It was the best part of half an hour before my friend realised she’d been robbed. And the way it was done suggests that the perpetrator could make a decent living as a stage magician or in a circus.
But then, theatre audiences are not quite so generous to the sleight-of-hand merchants as the mugs they feed off every day…
Posted by Unknown at 21.11.15

A terminal problem at Alicante Airport

I have a terminal illness. It's called Alicante Airport's No.1 runway- and last week it flew to the top of my most embarrassing moments. By a distance.

I made a public exhibition of myself in front of half the population of Spain. Or to be more accurate, the weekly Fun Quiz at Monte's Bar in Los Montesinos.

The British expat community here in the Costas, particularly those of us growing longer in the tooth (if we have any left) are quite partial to quiz evenings. It's good fun, the partaking is more important than the winning (she lied) and for anyone who has a semblance of a brain, the nearest we'll ever get to a Mastermind audition. 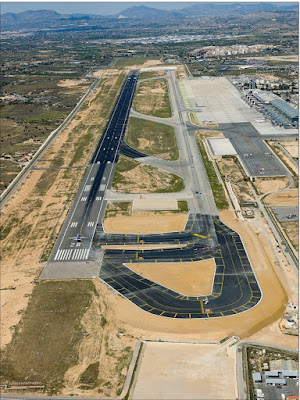 It is also living proof that nostalgia really is what it used to be...and one of the few benefits of being a Golden Girl.

Last week's cliffhanger at Monte's ended in two-way deadlock, so our team of Marjory, Ian, the two Pats and yours truly found ourselves facing a tie-breaker question. My lips broke into a quiet smirk as my disintegrating memory flashed back to the previous occasion two teams finished all square. We weren't involved, so my guess was irrelevant – but when I hit the exact figure for the capacity of Lord's cricket ground (28,000) our gang were gobsmacked.

This time it was another numbers game. How long, in metres, is the main runway at Alicante Airport? Cue suggestions from the team of 3,000 and 4,000. ''It's much more than that, insisted Mrs Knowall, “Something like 9,000 I reckon.''

'Sum thing' had clearly snapped as I tried to figure out the difference between metres and yards because in my mind it seemed to make sense. To have Darren standing over us waiting for an answer merely added to my confusion.

Amazingly my stubbornness prevailed, despite everyone else's enormous doubts. I got my way and we lost by a distance.

I paid for it big time, too. The repeated peals of laughter that accompanied our normally sedate drive back to El Raso were all at my expense.

And if you are ever confronted by an imaginary runway stretching from Alicante Airport through El Altet and out cross the Mediterranean, you know where it came from.

Jose Monllor Perez is small, dark, law-abiding and enjoys nothing more than relaxing with his pals, a cerveza and a cigarette. A stereotypical Spaniard, you might say.

We all have our own views on what constitutes an archetypal native of this particular Iberian nation. But how do the Spanish see the thousands, nay millions, of British holidaymakers who swarm around their country seeking the sunshine that invariably shuns our own grid-locked island?

For the past 16 years Perez has been teaching Spanish to students of all nationalities (myself included) on the Costa Blanca – the majority of them English. Teaching runs in Jose's family and after seeing 5,000 pupils pass through Berlingua’s doors, he’s a pretty good judge of character. The Alicante-born profesora is also a dab hand at another trait that runs in the family - art. And he paints a hilarious tongue-in-cheek assessment of the stereotypical Brit.

Spainly speaking, it seems we are an apologetic, dog-crazy, dirty, unfit, drunken bunch of tattooed hooligans. And those are our good points! The bad guys apparently all wear bowler hats and carry umbrellas.

Here’s the lowdown on how Spaniards see us – as interpreted by assessor Perez.

BRIT STEREOTYPE 1: ‘‘They are always saying ‘sorry’ and ‘thank you’. Sometimes I think that if you stamped on an Englishman he would apologise. And they say ‘thank