Jeremy Forrest and the joke of Britain's child-abduction law 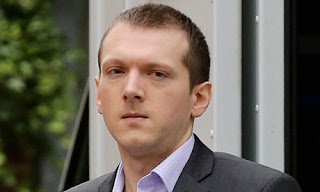 teacher Jeremy Forrest and his 15-year-old girlfriend were on the run in France, I questioned why Sir’s romantic jaunt across the channel was being projected in the UK as a heinous crime.
Now I know the answer. Basically the poor guy is beginning a five-and-a-half jail sentence for having a relationship with a young lady who happened to be a few months below the legal age of consent.
That, for a schoolteacher like Forrest (pictured) is far more disgusting than abusing little girls - assuming you side with the barmy-brained bunglers whose job is to make the punishment fit the crime in Britain.
I’ve taken a straw poll among my friends…and have yet to find one who agrees with the Judge and jury over Forrest.
UK law is such an ass that there’s now a gag on publishing the name of the girl, even though it was blasted all over Europe during the frenzy to return her to the mother she now despises.
The  prejudiced guardians of 'justice' got their way as Forrest, 30, was branded a paedophile and sentenced to more than four times the jail term given to ex-BBC broadcaster Stuart Hall for offences against REAL children aged as young as nine.
This, despite the fact that Forrest’s ‘victim’ mouthed sweet nothings across the court and vowed tearfully to wait for him rather than end the bitter impasse with her mother.
Mum talks of an unbridgeable rift with the girl - but that will only get worse now she’s has had the man her daughter loves locked away for what must seem a lifetime.
I do not believe Jeremy Forrest is a bad person, though he clearly has relationship problems. But I am less than convinced when ex-pupils suddenly come out of the woodwork with allegations of impropriety. ‘Publicity stunt’ is the expression that comes to mind – particularly when the headlines are accompanied by a photo of the ‘victim’ which might just attract a call from a modelling agency.
As for the unfortunate mother, she should know that teenage girls can be a nightmare. My two daughters were impossible at one point – but take away their hopes and their dreams and they will never forgive you. Well, not for several years, anyway.
This vindictive Mum seemed obsessed with putting Forrest behind bars. She told the media he had “robbed my daughter of her childhood’’. In that case, what was the girl doing during the 15 years before she met Jeremy – putting out Forrest  fires?
I suspect the school and the girl’s mum teamed up with the UK police in that ‘Find, Flog and Finish-off Forrest’ campaign last autumn. The French cops weren’t interested because Forrest had committed no crime under their laws. And indeed would be committing no offence in Britain now if he was not in jail. The problem is the archaic British law which deems that a young woman  approaching her 16th birthday is as much a child as a three-year-old toddler. It matters not that a teenager  looks 18, 19 or 20 - any young man who has sexual relations with her is by implication a paedophile.
Forrest was ridiculously convicted of abducting a ‘child’ – even though that ‘child’ went with him willingly and may even have instigated the ‘escape to France’ plan.
Arguably the most ridiculous edict handed down by Judge Michael Lawson QC was to bar Forrest from working with children for life and order him to sign the sex offenders’ register. Alongside real perverts, for heaven’s sake.
The whole circus aime to make an example of someone who broke the rule that teachers mustn’t have relationships with pupils. Even if the teacher has the enthusiastic support and loyalty of the ‘victim’.
In the misleading parlance reserved for perceived paedophiles, the court was told that Forrest ‘’groomed’’ the girl for his evil ends. But in a school environment where  it’s fashionable to have a crush on a teacher, who’s to say it wasn’t the girl who did the grooming? The Forrest affair is not about child abduction. It is about two young people who find romance in impossible circumstances – and run away together to escape the ever-growing mayhem orchestrated by the girl’s mother and a police force determined not to be seen as plonker plods.
The only people who come out of the affair with honour are Forrest’s family. Respectable and well-spoken, they repeatedly insist Jeremy’s behaviour has been misunderstood – which is obvious from the way he’s been demonised by judge, jury and most of the media as if he were a reincarnated Jimmy Savile.
So there’s 14 years age difference between Jeremy and the girl who cost him his freedom and his livelihood. What’s the big deal? My son-in-law is 16 years older than my daughter – but no one objected to them marrying and bringing up three gorgeous kids.
In five years time, Forrest will be 35 and the girl 21 – and there will be nothing to stop them  marrying.
I hope it happens because the guy deserves a break. He’s not a killer, a bank robber or a drug dealer. He’s a schoolteacher who made a mistake and can never teach youngsters again.
His consolation is that he won’t have to look far for money when he eventually gets his freedom. The two-faced tabloids will be falling over each other to hear the other side of the story…and the spirit of Romeo and Juliet will live again.
Published in The Courier (www.thecourier.es) - June 28, 2013