Every Day Fruitless - the energy company that drove me to despair

‘’We know that the energy industry is often criticised for its poor customer service,’’ wrote the company that supplied gas and electricity to my UK home. ‘’At EDF Energy we’re determined to do something about it.’’

That communication arrived several days after I kicked EDF out of my life after trying fruitlessly to contact them for several weeks with a query about my bill.

Staggered at their cheek in claiming the unclaimable, I kept on reading – and the bluster got worse (or better if you enjoy blatant distortions of reality).

‘’In a recent survey by uSwitch, we came runner-up for both best overall customer satisfaction and best customer service,’’ continued the letter.

Had it said '‘customer disssatisfaction’', I might have found it almost believable. Because a company that keeps callers waiting interminably to speak to a member of staff is going to satisfy nobody.

It was bad enough that my dual January bill for gas and electricity went through the roof. What blew my top was that I could not contact anyone at EDF to query it – because they simply would not answer the phone.

OK, that’s not quite as bad an experience as being cut off without warning – which Spanish utility companies are all too quick to do if direct debit payments don’t go through immediately on demand.

But, paying the price for continuing to maintain homes in both countries, I tried at all times of day to contact EDF by phone. And whilst I listened for up to 25 minutes to recorded messages telling me that all operators were ‘’very busy’’, I never once got through to a real person.

In despair, I fired off an angry email to their complaints department threatening to switch suppliers and giving them three days to contact me to answer my queries.

Two weeks later, I was still talking to a recording machine. So, 11 days after my three-day ultimatum, I sent EDF a ‘’goodbye’’ message and transferred my allegiance to Eon, using a cashback website that offered me a £50.50 perk for making the switch. (It’s well worth looking at registering on the site – there’s money in it for everyone. Just email me at donna773@aol.com and I’ll point you to it).

Ironically, EDF finally contacted me the same day – via a lady called Ann based in Sunderland who had just accessed my ‘goodbye’ email. Her garbled excuses quickly convinced me that I had made the correct decision in pulling the plug.

Why had my initial email complaint not even been acknowledged? That would be because the company was locked in part of a reorganisational programme which prevented anyone accessing it as yet. So that’s OK then – even if the explanation made no sense.

As far as my bill query was concerned, yes, admitted Ann, there WAS a problem getting through to an EDF operator. But that would be sorted out once the reorganisation was completed.

Right, so that’s OK as well. It’s all part of the company with the Best Customer Service. Just go missing and everyone is happy.

Thanks for all that, EDF. You’ve made me very happy. I’m £50.50 better off (in addition to the considerable savings Eon assure me I will make on my bills). And now hopefully I will actually be able to speak to someone when I call their service line.

Ann, I wish you well with your reorganisation up in Sunderland. I just hope you still have some customers left when it’s sorted. And if you ever go missing again, it might also be an idea to ask your bosses to form some sort of contingency plan to keep people like me aboard. Like not going missing at all.

But I will concede one point to EDF – and indeed to every UK utility provider. At least they don’t cut customers off without plenty of warning.

A mugs' game: How careless Brits are keeping Costa thieves in business

The gullibility of Brits in the Spanish Costas, and not only tourists, never ceases to amaze me.

Virtually every day I hear that someone or other has been the victim of a pickpocket or handbag snatch.

The experience of being mugged in public is both traumatic and disruptive, particularly if your passport happens to be among the stolen items. Which is why I have always been ultra-careful when it comes to protecting my possessions.

I have never been robbed – unless you count the evening I found 45 euros in notes on the floor of the Irish bar in El Raso and gave it to a tipsy punter who claimed he had dropped it. I realised when I got home that the money had fallen out of my own purse!

OK, that was stupid – but nowhere near as daft as those male tourists who wander around Spanish markets with their wallets wedged in the back pocket of their shorts. And the women who leave their handbags on a table or chair while they chat to friends – only to discover when they come to pay the bill that they have no money…and no handbag.

It happened to a friend of mine a few weeks ago. She went for a coffee after a busy day at work, plonked her handbag down alongside her and when she next looked - whoosh, it had vanished.

The sting was that this particular lady invariably carried all her documents, including her passport, in that bag, not to mention a considerable amount of money. It was an experience that will live with her until her dying day – and the saddest thing of all is that it could have so easily been avoided. 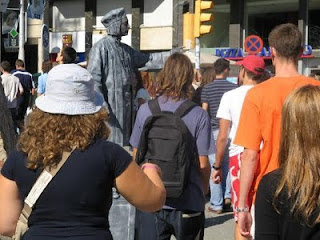 My friend has been living in Spain for some time, but most of the victims of the petty thieves tend to be tourists. They are so hell-bent on enjoying themselves that being robbed is the last thing on their minds. What juicy pickings for the villains...

I follow a regular procedure with my handbag. When I am in a public place, I always wrap the strap around my wrist so it can’t be snatched. And when I sit down, the strap goes under a chair or table-leg so it can only ‘vanish’ accompanied by an entourage of furniture.

Oh, and I NEVER take a bag to market – I carry cash in notes and wedge them into my bra. It means that no-one can rob me without being arrested for indecent assault!

My advice to men is that if you go anywhere where there’s a large crowd, leave your wallet at home, in your hotel, or hidden under the carpet in your car boot. Put the cash you need in your trouser pocket (not the back one!) and to make the fortress impregnable, how about keeping your hand in your pocket as you walk around?

While Spain’s Moroccan and Romanian communities are thought to be behind the majority of bag-snatches, I suspect the perpetrators come from more diverse roots. What one does have to concede is that these ladrones, however much reviled, have a remarkable skill.

One person I know had her purse stolen from the handbag on her shoulder as she browsed her way around a crowded department store. The thief not only unzipped the bag and removed the purse without anyone noticing – but also zipped the bag up again!

It was the best part of half an hour before my friend realised she’d been robbed. And the way it was done suggests that the perpetrator could make a decent living as a stage magician or in a circus.

But then, theatre audiences are not quite so generous to the sleight-of-hand merchants as the mugs they feed off every day…
Posted by Unknown at 10.5.11